The Country House: A Look At Villa Bologna In Malta

Frequently described as one of Malta’s finest examples of a noble baroque country residence, Villa Bologna is expansive and grand though still retains the feeling of a much loved family home.

Built in 1745 by Fabrizio Grech as a wedding present for his daughter, Grech was who was senior advisor or ‘Uditore’ to Grand Master Manuel Pinto da Fonseca wanted a way to display his wealth and silence his critics, this he most certainly achieved as the villa is as impressive today as it must have been when it was first revealed in the 1740’s. The architectural style of the villa is particularly special and shows an evolution in style from when designed, to the influential changes in style that occurred during its construction, as the neoclassical fast replaced the baroque. It is also speculated that Villa Bologna and Selmun Palace near Mellieħa were designed by the same architect as they share similar design features and similarly influenced by Italian styles of the time.

The Country House: A Look At Villa Bologna In Malta 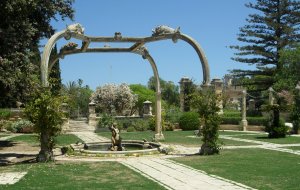 In the 1890’s Villa Bologna was inherited by Sir Gerald Strickland – arguably one of Malta’s greatest politicians who uniquely was elected both an MP in the UK House of Commons and the Prime Minister of Malta. It was at this time that the extensive gardens at the back of the house were constructed by Margaret Hulton, Sir Gerald’s second wife. These spectacular gardens have a distinct turn-of-the century character. Italian elegance and English restraint combine in a series of terraced gardens with immaculate lawns, the wonderful dolphin fountain, a sunken pond and vine-covered pergolas. The villa also has an extensive World War Two shelter.
At the end of the garden lay the old stables, which were converted into a pottery workshop in the 1950s. The pottery still produces a small number of classic pieces today, which are sold at the shop and across the island.
Today Villa Bologna functions as a thriving business, in addition to the pottery the extensive ground and gardens have turned the location into one of the islands most popular wedding venues for which it is certainly well suited. There is also the opportunity to tour the house and its grounds, and the trip is certainly worth one’s time.